Oh, man. Volume one was so incredible. I still can’t wait to read volume three, and I hope there will be more forever and ever. I don’t know why everyone had to be such a dick in this one, though.

Why did Des-whatever her name is volunteer to join the crew if she didn’t want to be there? Why the hell does Sunshine think it’s okay to demonstrate her pickpocketing skills by stealing someone’s bikini top? Why can’t anyone accept that Ximena doesn’t fight? Surely some people—like the cartographer—don’t have to be trained fighters? Why does Raven think she could “make” the others take a vote that would somehow force Ximena to fight? Who takes a vote that they won’t allow name-calling or meanness? It’s a pirate ship, not an online forum. I appreciate the idea, it was just done in such an unnatural-feeling way. And what is the deal with Melody, who just wants to timidly hug everyone? How did she end up on a pirate crew?

Anyway. Other notes: Katie is still a favorite, possibly the favorite based on how crappy everyone else was in this volume. The steampunk outfits are a teensy bit annoying. And Ximena reminds me of Topanga (which I love).

I also just have to say, though I do not hope to start an argument about whether or not hijabs are oppressive: the fact that no men are present is in no way proof that they aren’t. 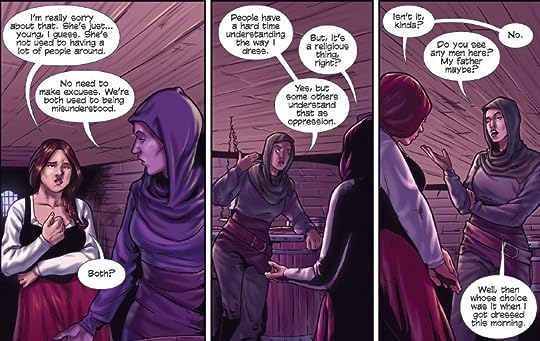 Because patriarchy is internalized, and women grow up in it too. It’s the same as the question of women wearing makeup. You’ve seen those memes or Tumblr posts that say something like, “I wear makeup for myself, not for a guy who can’t tell the difference between seventeen shades of gold”? But that’s kind of a distraction from the point. The fact is, regardless of any woman’s personal reasons for wearing makeup, society expects her to wear it, and penalizes her if she doesn’t. In that context, the “choice” to wear makeup is not a true choice. Any woman may have her own reasons for choosing to wear a hijab, but those reasons do not exist in a vacuum. And the fact that no man is currently present to enforce her wearing it proves nothing.