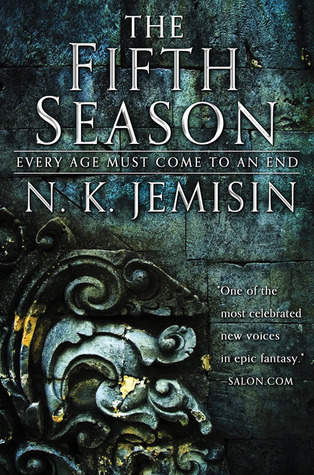 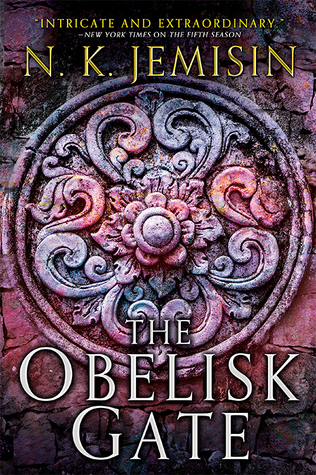 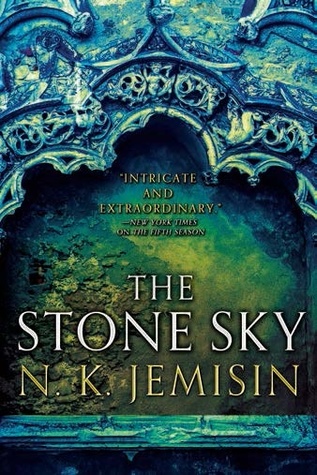 Five stars each and for the series as a whole; read mostly in December 2017.

I read this series for the past two weeks of 2017, and it is so annoyingly perfect that The Stone Sky was the first book I finished in 2018. My stony, cynical heart doesn’t want to feel as hopeful as this book is forcing it to feel. But hopeful isn’t exactly the right word; it’s more like . . . Oh, ugh, it’s inspired. Shit. I have just been through 2017, and I did not handle it well. I am not in the motherfucking mood to be inspired.

I have a habit of reading authors into their books. It’s not that I think any characters’ specific words or actions are the author’s own—more that I form an impression of their belief system based on that of the world they create. What kind of people are the characters we’re meant to identify with? What kinds of prejudices are displayed by characters in the book, and what kinds are revealed unintentionally by the writer? What are the heroes fighting for, and the villains? What do people in this universe value? These questions are important for me in understanding my relationship to the characters, to the book, and to the author. And after reading these three books, the impression I have of N.K. Jemisin is that she possesses all the traits I think are worth anything in myself, plus more, in their ideal forms.

In the world she has written, like in our own world, civilization was built on genocide and slavery, discrimination and brutality. Like in our world, and in our country specifically, personhood has been weaponized, withdrawn from certain people because it is apparently human nature to need, on a societal level, someone we can believe to be inferior. Like in our world, this is not okay.

Unlike in our world, individual people are capable of single-handedly Doing Something About It. That’s the fantasy part.

Some accept their fate. Swallow their pride, forget the real truth, embrace the falsehood for all they’re worth—because, they decide, they cannot be worth much. If a whole society has dedicated itself to their subjugation, after all, then surely they deserve it? Even if they don’t, fighting back is too painful, too impossible. At least this way there is peace, of a sort. Fleetingly.

The alternative is to demand the impossible. It isn’t right, they whisper, weep, shout; what has been done to them is not right. They are not inferior. They do not deserve it. And so it is the society that must change. There can be peace this way, too, but not before conflict.

And this is what I love so deeply about the world Jemisin has created: She flatly refuses to rationalize atrocities. In our world, any time oppressed people push back, defenders of the status quo jump in to explain why being oppressed doesn’t justify using violence against your oppressors. They say you must be patient, and diplomatic; they say your protest must be peaceful (but also not an actual protest). How can you persuade us to stop oppressing you, they ask, if you keep upsetting us by pointing out how we oppress you? You know we can’t stop oppressing people when we’re in a bad mood.

There are none so frightened, or so strange in their fear, as conquerors. They conjure phantoms endlessly, terrified that their victims will someday do back what was done to them—even if, in truth, their victims couldn’t care less about such pettiness and have moved on. Conquerors live in dread of the day they are shown to be, not superior, but simply lucky.

But this history is not told by the conquerors, and so we see that they were right to dread it. This is a story of slaves with the power to overthrow, large-scale, the system that enslaves them. They know there will be a cost, and because they have not internalized the propaganda that says they deserve their enslavement, they know it is a price worth paying. In this story, the defenders of the status quo—the ones who, in our world, would be screeching to Twitter that being systematically oppressed doesn’t give people the right to make their oppressors feel uncomfortable about it—do not get a voice.

So far I’ve made this series sound like a polemic, and though that would in fact be right up my alley, I am aware that others are more likely to be turned off. Don’t worry, it’s not. It’s an intricate, captivating fantasy that is maybe also science fiction; it’s an irresistible cast of complicated, diverse characters; it’s a thrilling, suspenseful story that at times had me actually reading with one hand over my mouth.

Because it’s the one point on which I found myself differing with Jemisin, I need to bring up the fact that it was a little jarring to see that passage about conquerors end with such an innocent word as “lucky.” It’s true that conquerors are lucky, of course; when arbitrary lines are drawn to say who gets to be human and who doesn’t, it is quite lucky to be on the human side. But that’s not all it is. Conquerors and their people are not superior, and they are lucky. They are also either cruel, delusional, or willfully ignorant. And they are all complicit.

For a society built on exploitation, there is no greater threat than having no one left to oppress.

The inspiration I don’t want is in the stoicism of the main characters. They’re not optimists, which I think is why I appreciate them so intensely. They’re realists. They don’t give rousing speeches or have uplifting thoughts (Ykka comes the closest as headwoman of Castrima, but she isn’t uplifting, she’s practical and that is what makes her inspiring because practicality is a trait we tend to denigrate here in the real world). Jemisin’s protagonists have everything taken from them, once and then again and again—and they don’t pretend it’s okay. They don’t comfort themselves with the pretense that they’ll see their lost loved ones again, or the belief that it happened for some unknowable reason that, if they knew it, would make it all worthwhile. (Things do happen for reasons, just like in our world; they happen because of human cruelty, weakness, indifference, and tribalism.)

But they don’t just despair, either. Or rather, their despair doesn’t stop them from doing what’s in their power to do. And what they learn, what Essun in particular learns, is that they can’t do it alone—even when they’re the only people who can do what they do—even when they can’t bear the pain of letting someone else in and then losing them. Undoing injustice is the right thing to do, and because of that, it can be done for someone else. But if we want to survive it, if we’re not planning on sacrificing ourselves to the cause, there’s something we have to do for ourselves.

“What is it that you want?”
“Only to be with you,” I say.
“Why?”
I adjust myself to a posture of humility, with head bowed and one hand over my chest. “Because that is how one survives eternity,” I say, “or even a few years. Friends. Family. Moving with them. Moving forward.”