This is a great premise, but it wasn’t carried out well. The dialogue is lame and the story is very unclear: teenage police officer leaves the year 2013—”the past”—to go back in time to 1986—”the present”—to stop a company from developing the technology that created her world, which she says should never have existed. Maybe I’m just very dense, but as far as I could tell this was never explained.

I mostly liked the artwork, except for the page on which we see a quantum physicist wake up in the morning dressed like this, with a stranger in her house: 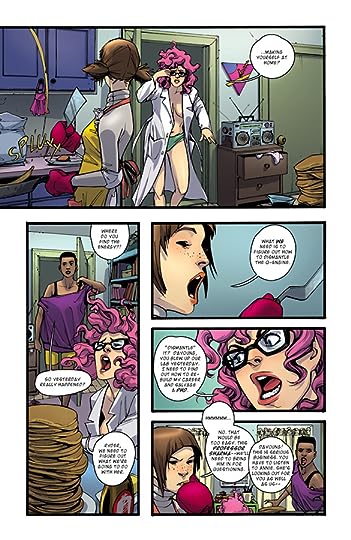 Which just doesn’t seem very natural to me, particularly because at first I thought it was supposed to be her lab coat and was absolutely enraged. I guess that’s the belt thing on a bathrobe, though? It’s hard to tell. In any case, it stood out to me because the rest of the book isn’t like that, with the cheap fanservice shots. It was definitely intriguing enough to pick up, but I don’t feel the need to read any more.