Remember those email surveys we used to do in the 90s and early 2000s? I did several the summer before my freshman year of college, when my future roommate and I had gotten each other’s names from the admissions office and were trying to get a sense of the person we’d be living with in the fall. A few months ago I found one of them, and a couple friends and I decided to fill it out. These are mostly the answers I sent them (with a few updates), and the title of this post is also the actual subject line.

Okay, here’s what you’re supposed to do…and try not to be LAME and spoilthe fun! Just give in. Copy (not forward) this entire e-mail and paste itinto a new e-mail that you can send. Change all of the answers so that theyapply to you. Then, send this to a whole bunch of people you know*INCLUDING* the person who sent it to you. The theory is that you will learna lot of little known facts about your friends. It is fun and easy MOSTUNIQUE SURVEY YOU WILL EVER TAKE here are some real different ones.

1. First Name: Gwen2. Were you named after any one?: This is the name I use for internet things, and I named myself after tough women who make me feel stronger. Gwen is after Gwendoline Christie, who plays one of my favorite characters in Game of Thrones (Brienne of Tarth is the name I use for gaming). March is for Jo March from Little Women. I’ve always identified with women who struggle against the expectation to be “girly.”3. Do you wish on stars?: Nope.4. Which finger is your favorite?: The hell kind of question is that?5. When did you last cry?: Last night but I’m blaming vodka. [This is the response I sent my friends when I did the survey, and I like it even though it’s not currently accurate. I can’t remember when the last time was right now, anyway.]6. Do you like your handwriting?: Sometimes it works, sometimes it doesn’t.7. What is your favorite lunch meat?: Ham or turkey.8. Any bad habits?: Good lord, where to start? How about binge eating flaming hot Cheetos?9. What is/are your most embarrassing CD(s) on your shelf?: Aw, what a 90s question. I don’t think anyone should be embarrassed about the music they like, but I definitely was when I recently bought an Evanescence album to replace the scratched disc I’d burned in high school.10. If you were another person, would you be friends WITH yourself? I think so, the way I am now. I vacillate between hating myself and thinking it’s unfair that other people don’t see how secretly cool I am.11. Are you a daredevil?: Not at all.12. Have you ever told a secret you swore not to tell?: Yeah, because I can’t hold up under peer pressure. More of an issue in high school than any time since.14. Have you ever misused a word and it sounded absolutely stupid?: I feel like everyone’s guaranteed to have done this, but I can’t think of a particular example.15. Do you think there is a pot of gold at the end of the rainbow?: Eh. Nope. I think the world is pretty much garbage except for the few people who are actively trying to make it not be.16. Do fish have feelings?: Why not?17. Are you trendy? Hahaha no.18. How do you release anger? Depends on the kind of anger . . . Fast driving while listening to my Foo Fighters playlist is a good one, punching my thigh is a less good (but pretty satisfying) one.19. Where are your second homes?: My job, actually. I left it for eight months, and now that I’m back, I can’t believe I ever didn’t work there. It’s as much a part of my life as my family is.20. Do you trust others easily?: Not new people—it takes me a very long time to get comfortable with someone. But people I’ve known for a long time have to be pretty consistently awful before I’ll stop trying to give them the benefit of the doubt.21. What was your favorite toy as a child?: Like 95 percent books, but I loved this bike, too. I wish I still had it. 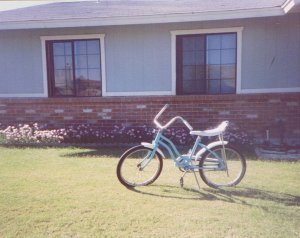 22. What class in school do you think is totally useless?: Maybe history, the way it’s currently taught in the U.S. All of the boring, meaningless information we don’t care enough to remember; none of the historical context we need to actually understand the world. American textbooks are primarily set by political conservatives and creationists, so you can imagine how that goes.23. Do you have a journal?: Yes, but I haven’t written regularly for years. I was a dedicated, very detailed journaler as a teenager.24. Do you use sarcasm a lot?: Not really anymore, I’m just realizing. I used to.25. Have you ever been in a mosh pit? Sort of.26. What do you look for in a Guy/Gal?: Basically, not being a dick.27. What are your nickname(s)?: Growing up my siblings called me Moira like the girl in Peter Pan. 28. Would you bungee jump?: Probably not.29. Do you untie your shoes when you take them off?: Never, if I can help it (with the obvious exception of my Converse high-tops).30. Do you think that you are strong?: I can’t decide.31. What’s your favorite ice cream flavor? Coffee, preferably with toffee and nuts, or chocolate with pieces of brownie.32. What are your favorite color(s)?: Blue and green.33. What is your least favorite thing?: I have a lot of favorite and least favorite things but I don’t think I could ever rank them precisely enough to have just one winner (loser). Some of my least favorite things are insects, doing dishes, right-wing Christian extremists, “cute” “alternative” spellings (Kwik Kar, etc.), trying to make small talk when I meet someone new, the color pink.34. How many wisdom teeth do you have?: I’ve never had any removed.35. Are you in love with anyone?: Yes.36. How many people have a crush on you right now?: SO MANY. You don’t even know.37. Who do you miss most right now?: I miss having girlfriends. I used to have so many amazing friends, and the ones I have now all live far away.38. What color pants are you wearing?: Black leggings.39. What are you listening to? Myself typing! And the air conditioning, and Nirvana in my head, because I was listening to Nevermind earlier today.40. What are the last 4 digits of your phone number? 629441. What are the first 3 digits of your phone number? 927. I feel like this is silly and/or cute for some reason?42. What is the last thing you ate?: Flaming hot Cheetos.43. If you were a crayon, what color would you be?: Green.44. How is the weather right now?: Hot. Humid. Horrible. But actually getting slightly less horrible as August progresses, so there’s hope.45. Last person you talked to on the phone?: Not counting patrons at the library, my brother.46. The first thing you notice about the opposite sex?: Depending on their proximity to me, probably whether or not they’re intimidating.47. Do you like the person who sent this to you? Well, the person who sent it to me originally was my best friend, who stopped talking to me when I started questioning my conservative Mormon upbringing. At the time that we did this survey, she was my favorite person in the world.48. How are you today?: Not bad so far. I slept incredibly well last night, and sleep is often a problem for me. 49. Favorite drink?: Sake or a cafe latte.50. Favorite alcoholic drink?: Sake, whiskey, or a vodka martini.51. Favorite sports?: Zero sports, sir! If I absolutely had to pick one, basketball.52. Hair color?: Brown53. Eye color?: Brown54. Do you wear contacts?: I switch between glasses and contacts. It’s been glasses for . . . a year and a half, probably.55. Siblings: Two sisters, three brothers. I’m the oldest.

56. Favorite month?: October, November, or December.57. Favorite food?: Pasta, sandwiches, strawberries and cantaloupe, potato soup, pho, ramen, Thai, Korean, Indian. I love food in general, especially spicy, but I have a problem with certain textures. I can’t eat shrimp, for example, even though I like the taste. I tried so hard to love sushi, but it hasn’t worked yet.58. Last movie you watched?: Kubo and the Two Strings. The animation was gorgeous and I found the first third of the movie—the call to adventure, archetypally speaking—almost mesmerizing. Once the quest actually starts it was a lot more predictable, but still enjoyable.59. Favorite day of the year?: I don’t think I have one?60. Are you too shy to ask someone out?: Yeah, even now I probably couldn’t do it. Hence my inability to make new friends.61. Scary movies or happy endings?: Neither. I have nothing against happy endings, but I don’t like movies that were made just for that purpose. And I don’t like being scared.62. Summer or winter?: Winter, until I move somewhere that summer doesn’t make me want to die.63. Hugs or kisses?: Pretty much always would depend on the circumstances, I think.64. Relationships or one night stands?: Both have merits.65. Do you want your friends to write back?: YES THAT IS THE POINT!66. Who is most likely to respond?: You.67. Who is least likely to respond?: Why did surveys always have these questions? They always had them.68. Living arrangements?: An apartment I love in a city I like in a state I loathe in a country I don’t care much for, on the whole.69. What books are you reading?: The God Delusion, by Richard Dawkins; Kojiki, by Keith Yatsuhashi; and on audio in my car, Hard Choices, by Hillary Rodham Clinton.70. What’s on your mouse pad?: My mouse pad is nonexistent.71. Favorite board game?: I don’t play much anymore, but I especially like Settlers of Catan, Ticket to Ride, and Lord of the Rings Risk. 72. What did you watch on TV last night?: We didn’t watch TV last night, but the shows we’re currently watching are Elementary (with Lucy Liu and Johnny Lee Miller) and Akame ga Kill.73. Favorite smells?: Pine trees, rain, delicious food I’m about to eat.74. What is the first thing you think of when you wake up in the morning?: What, like I have the same thought every day? Depends on the morning, and then I probably forget it pretty much immediately.