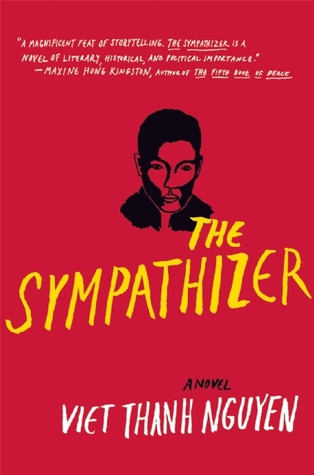 This is a book about a Communist spy during the Vietnam War. That premise was intriguing enough for me to pick it up, but while it continued to be an engaging plot throughout the book, for me the plot became secondary to the smart, insightful narrative voice.

We never learn the narrator’s name, a fact I didn’t even realize until coming to write this review (I think it’s often that way with well-written characters). He’s addressed as “captain,” his military title, which probably makes it less obvious, but he also has such a distinct voice that I never felt anything vague about him. The son of a young Vietnamese woman and a French Catholic priest who never acknowledges him, our narrator knows what it’s like to be part of two groups and part of neither. This makes him a perfect spy, observant and able to empathize with anyone on any side of an issue.

His observations on Americans are particularly sharp, and ended up being one of my favorite aspects of the book. It’s such a profound perspective—totally straightforward, neither flattering nor demonizing—and somehow seeming to just really get it.

So, [Dr. Hedd] said, are you happy? It was an intimate question, nearly as personal as asking about my salary, acceptable in our homeland but not here. What was worse, however, was that I could not think of a satisfactory answer. If I was unhappy, it would reflect badly on me, for Americans saw unhappiness as a moral failure and thought crime. But if I was happy, it would be in bad taste to say so, or a sign of hubris, as if I was boasting or gloating . . .

What about you, Dr. Hedd? I asked. Are you happy?

The doctor was unfazed by my question, parsing his peas with his knife before deciding on a sliver of steak. As you evidently realized, he said, there is no good answer to that question.

No, because happiness, American style, is a zero-sum game, sir. Dr. Hedd slowly turned his head in an arc as he spoke, making sure that he saw every man in the room. For someone to be happy, he must measure his happiness against someone else’s unhappiness, a process which most certainly works in reverse. If I said I was happy, someone else must be unhappy, most likely one of you. But if I said I was unhappy, that might make some of you happier, but it would also make you uneasy, as no one is supposed to be unhappy in America. I believe our clever young man has intuited that while only the pursuit of happiness is promised to all Americans, unhappiness is guaranteed for many.

Gloom descended on the table. The unspeakable had been spoken, which people like the General and myself could never have uttered in polite white company without rendering ourselves beyond the pale. Refugees such as ourselves could never dare question the Disneyland ideology followed by most Americans, that theirs was the happiest place on earth. But Dr. Hedd was beyond reproach, for he was an English immigrant. His very existence as such validated the legitimacy of the former colonies, while his heritage and accent triggered the latent Anglophilia and inferiority complex found in many Americans. Dr. Hedd was clearly aware of his privilege and was amused at the discomfort he was causing his American hosts. It was in this climate that the General intervened.

I loved this scene, and so many others like it.

Everything about our narrator is morally ambiguous at best, and yet I never found myself judging or disliking him for that. I can recognize that this is all at least partly a reflection of me; with the same kind of perverse pleasure you sometimes get from pushing on a bruise, I deeply appreciate representations of how shitty the U.S. can be as a collective entity, and Americans on an individual level. In real life I’m surrounded by people who refuse to recognize that shittiness, who insist on American superiority and loudly subscribe to a code of morality that is, to me, utterly immoral. This includes, to various degrees, ideas about nationalism, patriotism, and war, all of which are obviously central to the theme here. (This is not a book that just hates on Americans, but also, if you’re the kind of person who needs me to reassure you that it’s not a book hating on Americans, it’s maybe not up your alley anyway.) These philosophical questions are what made the book for me.

He saw only one meaning in nothing—the negative, the absence, as in there’s nothing there. The positive meaning eluded him, the paradoxical fact that nothing is, indeed, something. Our commandant was a man who didn’t get the joke, and people who do not get the joke are dangerous people indeed. They are the ones who say nothing with great piousness, who ask everyone else to die for nothing, who revere nothing. Such a man could not tolerate someone who laughed at nothing.