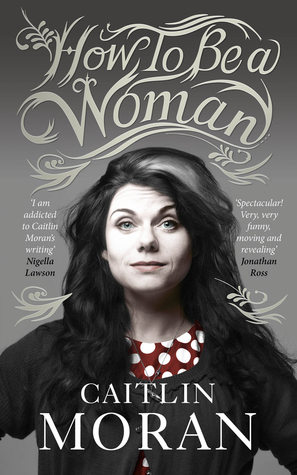 Well, you’ve been wondering, and so I am not going to keep you in suspense: Yes. This book is amazing. Caitlin Moran is British, she’s a feminist, she’s a music journalist, and she’s hilarious. That is really all you need to know.

What’s that? You want to be enticed? Well, all right. In the first place, before you read this book you must watch the video that is essentially a trailer for it. You need to have her voice in your head, and you can’t really get a better teaser than this.

On the subject of how the media obsesses over women’s bodies and talks as though a woman’s entire self is reflected in the pounds she is or isn’t gaining over the weekend:

Lily Allen, Angelina Jolie, Drew Barrymore, Jennifer Aniston, Michelle Obama, Victoria Beckham, Amy Winehouse, Mariah Carey, Lady Gaga, Madonna . . . There can’t be a magazine-consuming woman in the Western world who’s not been called upon to speculate on the mental and emotional health of these women on the basis of a single bad photo of her. I’ve read more about Oprah Winfrey’s arse than I have about the rise of China as an economic superpower. I fear this is no exaggeration. Perhaps China is rising as an economic superpower because its women aren’t spending all their time reading about Oprah Winfrey’s arse. If I knew more about China, and less about Oprah Winfrey’s arse, I could probably argue a direct cause-and-effect.

And on the subject of what sexism is really about:

I don’t think sexism is a “man vs. woman” thing. The Man is not The Man simply because he’s a man. Sometimes, The Man is a woman . . . As I start to watch men and women interacting in the adult arena—in work, relationships, and marriages but mainly, to be fair, in the pub—I don’t come to believe, as many people do, including the Goddess Greer, that men secretly hate women . . . No. Even though I’m quite drunk half the time, and often wearing so much eyeliner that I am technically blind, I don’t see it as man vs. woman at all. What I see, instead, is winner vs. loser. Most sexism is down to men being accustomed to us being the losers. That’s what the problem is. We just have bad status . . . For men raised prefeminism, this is what they were raised on: second-class citizen mothers; sisters who needed to be married off; female schoolmates going to secretarial school, then becoming housewives. Women who disengaged. Disappeared. These men are the CEOs of our big companies, the big guys on the stock markets, the advisors to governments . . . The entrenched bias against the working, liberated female will only die out when they do.

Even those men born postfeminism… however much they might believe in the theoretical equality of women and respect those around them, are scarcely unaware of the great sweep of history that went before. A quiet voice inside—suppressed but never wholly silenced—says, “If women are the true equals of men, where’s the proof?” And it is not just a voice inside men. It is inside women, too. Even the most ardent feminist historian, male or female—citing Amazons and tribal matriarchies and Cleopatra—can’t conceal that women have basically done fuck-all for the last 100,000 years . . . We have no Mozart; no Einstein; no Galileo; no Gandhi. No Beatles, no Churchill, no Hawking, no Columbus. It just didn’t happen. Pretending that women have had a pop at all this before but just ultimately didn’t do as well as the men . . . gives strength to the belief that women simply aren’t as good as men, full stop. That things should just carry on as they are—with the world shaped around, and honoring, the priorities, needs, whims, and successes of men. Women are over, without even having begun. When the truth is that we haven’t begun at all. Of course we haven’t. We’ll know it when we have.

I love nearly everything Caitlin Moran has to say about modern feminism. Not everything, and sometimes everything except the way she says it. Her use of insensitive words, for example. Her thoughts on burqas. And in the above excerpt, she has a point about Mozart and the Beatles, but even with the limited amount of study I’ve done I know she’s wrong about those possibilities never having existed. There have been plenty of women who could have been Mozarts and Einsteins and Churchills, but they weren’t given the attention they deserved, and they’ve been ignored since. Mozart is actually a perfect example, because his sister was a prodigy before he was, and they used to tour together until she wasn’t allowed to anymore.

More than once, I had to stop reading before I wanted to, because my husband couldn’t sleep with me laughing aloud in the bed next to him. Incidentally, he is now reading the book himself. Started even before I finished, so I had to keep taking it back from him. And I love when he stops to read me the very same passages that had made me laugh.