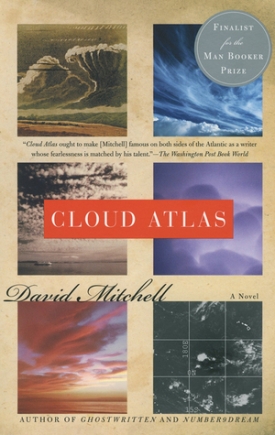 I was really excited to win this through the Goodreads First Reads giveaway, because it’s one I’d been hearing about for a while. Even so, I wasn’t expecting what I got. I was completely caught up in reading it, and almost wished it didn’t have to end, even after more than five hundred pages.

It’s an excellent, fascinating story—or stories, really. There are six stories intertwined with each other, each leading into the next for the first half of the book, then working backward from the middle for the second half. I know this was confusing for a lot of people, but I loved it. The Robert Frobisher and Luisa Rey storylines were my favorite, but even the ones with characters I disliked (Cavendish) and the ones that were hard to read (Zachry) became totally engrossing.

I’m going to watch the movie with low expectations, but I still want to watch it just to experience another dimension of this fantastic book. [Update: I watched it and was surprised by how well it was done, with the significant exception of the yellowface. You can see why they thought it would add something to this particular movie, knowing the themes of the book—but no, it’s still just not okay.]

The final pages were especially poignant for me, surprisingly reflective of, as well as an answer to, some of my own current internal struggles. This book is easily joining my favorites list.

A life spent shaping a world I want Jackson to inherit, not one I fear Jackson shall inherit, this strikes me as a life worth the living . . .

I hear my father-in-law’s response . . . “Oh, you’ll grow hoarse, poor & gray in caucuses! You’ll be spat on, shot at, lynched, pacified with medals, spurned by backwoodsmen! Crucified! Naive, dreaming Adam. He who would do battle with the many-headed hydra of human nature must pay a world of pain & his family must pay it along with him! & only as you gasp your dying breath shall you understand, your life amounted to no more than one drop in a limitless ocean!”

Yet what is any ocean but a multitude of drops?